Esala Perahera (the festival of the tooth of Lord Buddha) is the grand festival of the month of August held in Sri Lanka. It is very grand with elegant costumes. Happening in July or August in Kandy, it has become a unique symbol of Sri Lanka. It is a Buddhist festival consisting of dances and nicely decorated Elephants. There are fire-dances, whip-dances, Kandian dances and various other cultural dances. The elephants are usually adorned with lavish garments.

The TOOTH RELIC was taken in procession to Sri Lanka by Princess Hemamala & Prince Dantha.

The Modern Perahera dates back to the reign of the Kandyan King Kirthi Sri Rajasinghe (1747 – 1781 AD). During these times, the Tooth Relic was considered the private property of the King and the public never got a chance to worship it. However, King Rajasinghe decreed that the Relic be taken in procession for the masses to see and venerate.

After the Kandyan Kingdom fell to the British in 1815, the custody of the Relic was handed over to the Buddhist Clergy. In the absence of the king, a lay custodian called the “Diyawadana Nilame” was appointed to handle routine administrative matters.

The Kandy Esala Perahera begins with the Kap Situveema or Kappa, in which a sanctified young Jackfruit tree (Artocarpus integrifolia) is cut and planted in the premises of each of the four Devales dedicated to the four guardian gods Natha, Vishnu, Katharagama and the goddess Pattini. Traditionally it was meant to shower blessing on the King and the people. 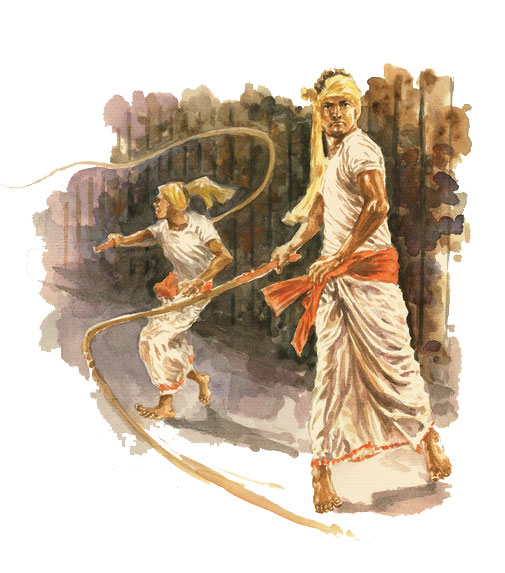 For the next five nights, the “Devale Peraheras” take place within the premises of the four Devales with the priest of each Devale taking the pole every evening, accompanied by music and drumming, flag and canopy bearers, spearman and the Ran Ayudha, the sacred insignia of the Gods.

On the sixth night, the Kumbal Perahera begins and continues on for five days. Initially, the Devale Peraheras assemble in front of the Temple of the Tooth, which is Sri Lanka’s most important Buddhist Shrine and where the Buddha’s Sacred Tooth Relic has been kept since the 16th Century) with their insignias placed on the ransivige (a dome-like structure) accompanied by the Basnayake Nilames (the lay custodians of the Devales).

The relic casket, which is a substitute for the Tooth Relic, is placed inside the ransivige affixed to the Maligawa Elephant, a tusker. At about 8pm, the Maligawa Perahera joins the awaiting Devale Peraheras and leads the procession. Whip-crackers and fireball acrobats clear the path, followed by the Buddhist flag bearers. Then, riding on the first elephant, is the official called Peramuna Rala (Front Official). He is followed by Kandyan Drummers and Dancers who enthrall the crowd, and are themselves followed by elephants and other groups of musicians, dancers and flag bearers. A group of singers dressed in white heralds the arrival of the Maligawa Tusker carrying the Sacred Tooth Relic. The Diyawadana Nilame (traditionally required to do everything in his power to ensure rain in the correct season) walks in traditional Kandyan-clothed splendor after the tusker.

The second procession is from the Natha Devale, which faces the Sri Dalada Maligawa and is said to be the oldest building in Kandy, dating back to the 14th Century.

The third is from the Vishnu Devale (Vishnu being a Hindu god), also known as the Maha Devale. It is situated in from of the main gate of the Natha Devale.

The fourth procession is from the Katharagama Devale (dedicated to the God of Katharagama, identified with the warrior god Skanda) which is on Kottugodalle Vidiya (a street in Kandy). This procession includes Kavadi, the peacock dance, in which the pilgrim-dances carry semicircular wooden contraptions studded with peacock feathers on their shoulders.

The fifth and final procession is from the Pattini Devale (Pattini being a goddess associated with the cure of infectious diseases and called upon in times of drought and famine), which is situated to the West of the Natha Devale. This is the only procession that has women dances.
The following important times are announced by the firing of cannonballs, which can be heard all across Kandy.

The Randoli Perahera begins after five nights of the Kumbal Perahera. Randoli refers to palanquins on which the Queens of the ruling Kings traditionally traveled.

Diya Kepeema and the Day Perahera

After a further five nights of the Randoli Perahera, the pageant ends with the Diya Kepeema, which is the water cutting ceremony at the Mahaweli River at Getambe, a town a few miles from Kandy. A Day Perahera is held to mark the ceremony I’ve lived in Sri Lanka since the prehistoric period. Like so many of my closest relatives, many… Asia is the rice basket of the world. This fast-growing carbohydrate allows for up to 4 harvests… Sri Lankan Villas Give You Room to Move

The spacious rooms of colonial villas housed Sri Lankans for more than 400 years. They…

Register with your email

Please enter your username or email address. You will receive a link to create a new password via email.